Brierley Lodge Farm, this farm is on land that was held by the Lords of Brierley Manor.

Brierley Lodge farm stands on the south corner of Brierley Old Park which centred on the Manor House, Brierley Park was a medieval hunting area and is clearly marked on Christopher Saxton’s 1577 map of Yorkshire. The name Brierley Lodge suggests that it was built as a gate house to the old park. New Park was enclosed in the early 1600s. on land to the south east of the old park it enclosed a large area of woodland. This woodland was managed for timber, the new growth was called at that time spring wood, the meaning of New Park Spring.

Many of the Grimethorpe farms were included in rentals for New Park. In a Brierley Manor rental dated 1662 Henry Shirtliffe junior paid £13-10-00 for his home in New Park this could have been for Brierley Lodge.

In a rental dated 1701 Richard Richardson paid a half year rent of £10-1-07 for his home in New Park he would have paid another £10-1-07 but there is no record of this. His home was most probably Brierley Lodge as Felkirk Parish Registers state that the Richardson family lived at Brierley Lodge. A later rental dated 1720 has Richard Richardson junior paying £31-8-14 in two instalments for his home in New Park.

Brierley Tithe Apportionment Award dated 1840 has John Richardson occupying plot 364 owned by George Savile Foljambe the then Lord of Brierley Manor. The map with this award shows the plot to be Brierley Lodge.

The 1841 census has John Richardson aged about 50 with his wife and three children living at Brierley Lodge with two live in labourers.

Then in 1881 Brierley Lodge was occupied by a widower Elymas? Hewson aged 61 who was born in Tetney near Cleethorpes. He farmed 120 acres and had a labourer called Henry Stevenson (61) with his wife Jane (65) from Barmby Don living with him.

On the 1901 census John Leybourn aged 27 a farmer born in Brierley was living at Brierley Lodge with his wife Annie aged 24 who was born in East Markham Nottinghamshire, they had a daughter Florence age 5 who was born in Shafton, and one live in labourer Lewis Fletcher age 19 who was born in South Driffield.

By 1904 Carlton Main Colliery were the occupiers of Brierley Lodge and other properties in Brierley and Grimethorpe.  In 1919 Colonel Foljambe sold many of his farms in the villages, these included Brierley Lodge   Farm with 90 acres of land.

Wood House on the road into New Park Brierley from Great Houghton would serve as a gate house to the estate. The site may have been occupied from the creation of in the early 1600s. But there is no record of it until 1840.

In papers held at Nottingham University Library, dated 1639 relating to a coal mine in Brierley there is a page of accounts for the sale of wood in the year 1639. These refer to Spring Wood. The Shorter Oxford English Dictionary defines spring wood as a copse of young trees or a plantation enclosed to keep game. As in Brierley New Park.

Below is a copy with a transcript in which the original spellings have been retained. 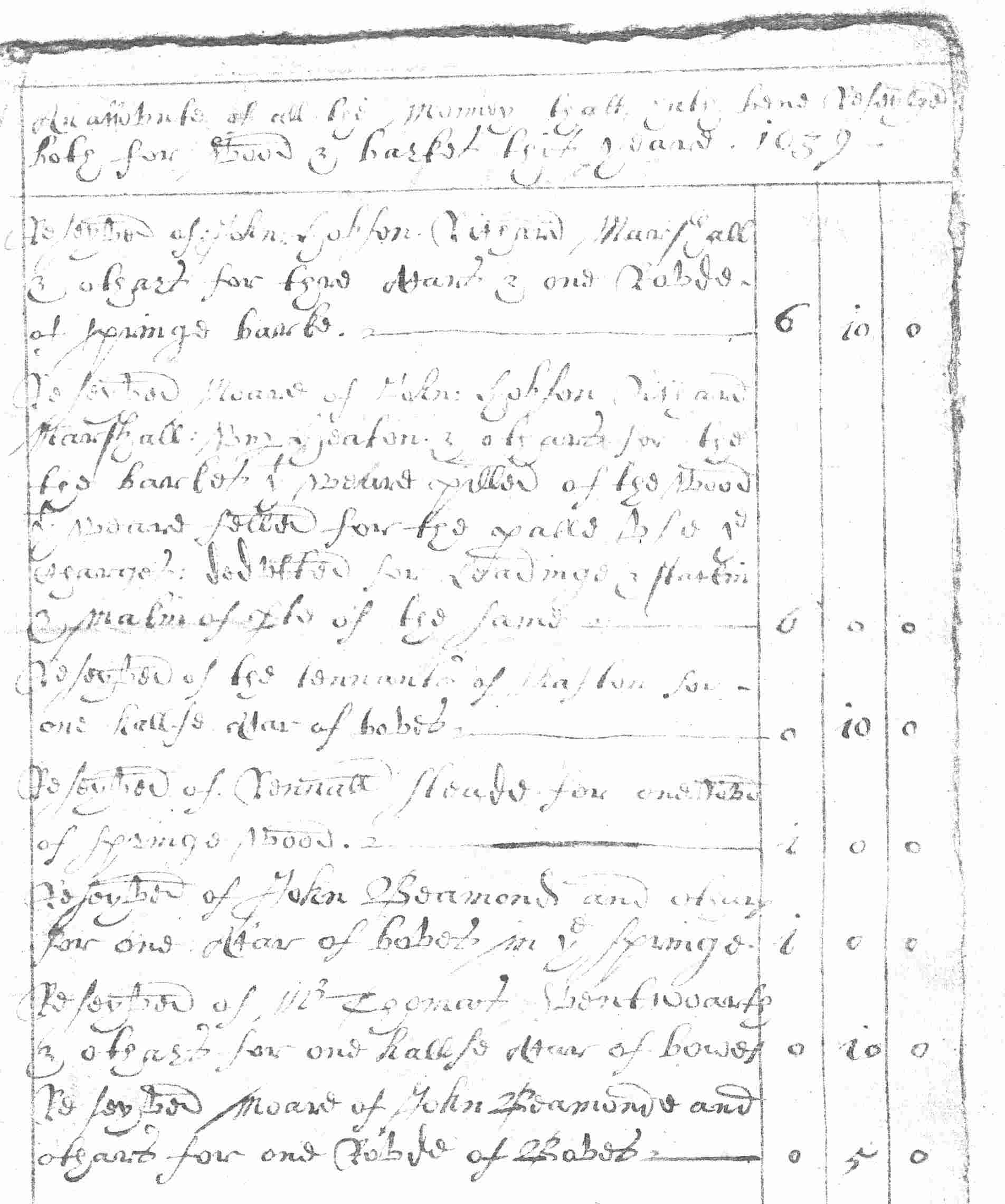 Both for Wood and barkes this year 1639-

; Wm Heaton & othars for the

the Barkes -- y-weare pilled of the wood

y- waere felled for the palle use ye

Reseyved of the tennants of Shafton for

Brierley Manor Rentals do not list Wood house but it would be too small an estate to be named.

Brierley Rentals. These rentals were payable at Martinmas. Grimethorpe was included in .

New Park is not mentioned and the rents are payable at Whitsun and Martinmas.

Thomas Jefferies detailed map of the area dated 1775 shows the wood in but does not show the Wood House.

The Tithe Award survey of 1840 shows New Park Spring as a wood of 101 acres owned by George Savile Foljambe. The same survey shows the land and a building on the site of the Wood House as Wood Close but lists no occupants. George Jarret Horsefall occupied the Manor House owned by George Savile Foljambe and farmed Wood Close which then covered about 6 acres and was described as grass land. It is possible that Wood House was inhabited at that time as tenants not paying tithes were not recorded.

On the 1841 census following the family at Grimethorpe Lodge there is Wood House with;

The next entry is Margaret Addy a Farmer at Grimethorpe.

Trought is a very rare surname. There were only sixty people with the name in on the 1881 census. It is listed as a variation of Trout. Nine of these were in . Seven of them were the family of Henry Simpson Trought aged 33 from Bonby near Barton on Humber Lincolnshire and living in Hull. A Moses Trout aged 67 an agricultural labourer is listed as living in Mirfield with his family where he was born. It is possible that John Trought was his father and using an older variation of the name and that Moses was living with him at Wood House in 1841. Also on the 1881 census are Mary Trout aged 25 & Esther Trout aged 20 both born in Barnsley they were living in Elland near .

The Ordnance Survey 6” map dated 1856 clearly shows New Park Spring as a wood, and shows the Wood House just to the south of New Park, on the path from Grimethorpe via Wood Lane to Great Houghton.

On the 1861 census following Brierley Lodge there is Wood House with;

The next homestead is Next Ferry Moor Farm.

On the 1881 census following Brierley Lodge there is a homestead at New Park Spring occupied by;

Darfield and Felkirk parishes met at the stream near the Wood House. The next homestead listed is Ferry Moor Farm.

Their nearest neighbours were the Siddons family at Park Field House Farm near Little Park on the border of  Great Houghton and Little Houghton. In Grimethorpe village there was the family of  Sherad Lamb aged 54 a Woodman born in Markham Clinton, . His wife Annie was born in Worksop.

On 29th. October 1919 most of  the Foljambe’s estates in Brierley were sold. Carlton Main Colliery Co. were the major purchases of this land.

A smallholding of 21 acres with a small homestead to the south of New Park Spring occupied by Mr. F. Hibbert was among the items up for sale. He paid a rent of £20 per year. This would be the Wood House plus Wood Close and probably two adjoining closes called Holmes and Bottoms to make up the 21 acres.

These two later closes were covered by the growing spoil heap of Grimethorpe Colliery by the late 1950’s. This would be the part of the reason for the abandoning of the Wood House. The remoteness of the house and the  difficulty of supplying modern amenities such as running fresh water and mains electricity would be another factor. The Sidlow family from were the last to occupy Wood House. They lived there from 1937 to 1956.